Near the LA Convention Center

The area between the 7th/Metro Center Station and the LA Convention Center spans two downtown districts — the Financial District and South Park — which are experiencing significant urban revitalization. Many historic buildings have been reinvigorated for mixed use: offices, retail, and residences. It has become a sought-after residential area because it now has the urban amenities to support a city lifestyle.

The shopping and dining complex of FIGat7th (pictured above), located on Figueroa at 7th Street, two blocks from the Sheraton Hotel, offers a high-end food court, Taste.

The Fine Arts Building (811 West 7th Street), built in 1926 as studios and galleries for downtown artists, was fully restored as a premier office building with ground-floor retail spaces adjacent to the building’s dramatic lobby. The Fine Arts Building is a Los Angeles Cultural Heritage Monument and is listed on the National Register of Historic Places. In addition to observing the intricate exterior, the lobby is well worth a walkthrough.

According to a local historian:

“Befitting a structure dedicated to the arts, some of the most talented artisans in the Los Angeles area were hired to beautify the space. Pasadena’s Ernest A. Batchelder, one of the leaders of the Arts and Crafts movement and the ‘nation’s premiere designer of decorative tiles,’ supplied countless custom tiles for the exotic lobby. Anthony B. Heinsbergen created the paintings and murals. The Dutch-born designer and muralist was known for his work at the Roosevelt Hotel, L.A. City Hall, and … over 700 movie theaters he decorated over his career.

“… Claremont sculptor Burt William Johnson designed the reclining figures representing ‘sculpture’ and ‘architecture’ on the third floor exterior. … Though only 37, Johnson had major heart problems and worked from a wheelchair (he would die three months after the building opened). His sculptress sister Annetta Johnson Saint-Gaudens, the sculptor Robert Merrill Gage, and other assistants helped him with his work on the building. To reach his sculptures on the façade of the exterior, he was hoisted in his wheelchair up the side of the building.”

The Oviatt Building is an Art Deco treasure listed in the National Register of Historic Places and designated as a Los Angeles Historic-Cultural Monument. Located at 617 S. Olive Street, half a block south of 6th Street and Pershing Square, it is southeast of 7th/Metro Center. According to a local historian: “Oviatt had fallen in love with Lalique glass at the famous 1925 Exposition in Paris. Soon, thirty tons of custom-made Lalique, including a ceiling, doors, chandeliers, and elevator panels were shipped through the Panama Canal, the largest shipment of its kind to America.” Today, the Cicada Restaurant, located in the ornate Art Deco space, converts into a 1920s-’30s style nightclub on most weekends, Maxwell DeMille’s Cicada Club, complete with live bands/orchestras, singers, and dance floor. 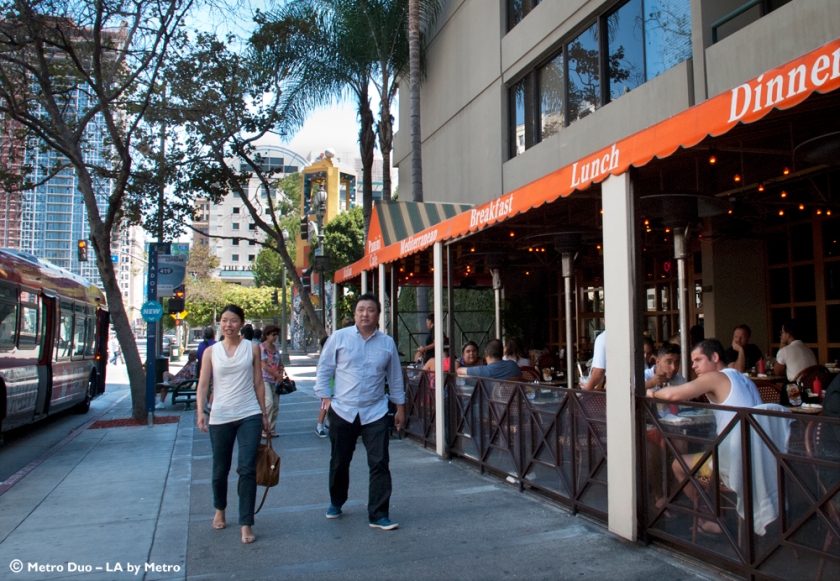 The area between 7th and 9th Streets is filled with restaurants and bars featuring cuisine of all varieties and price ranges. Sidewalk dining is abundant. Instead of our giving restaurant reviews, we suggest using Yelp and Zagat — their mobile apps use GPS to help you locate the eateries close to where you are. 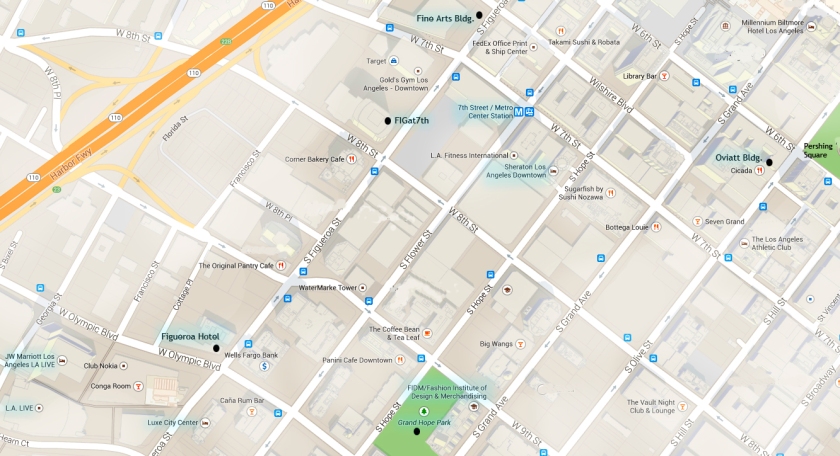 The Fashion Institute of Design and Merchandising (FIDM) is a specialized, private college preparing students for careers in the fashion, graphics, interior design, and entertainment Industries. Attractions on campus are the FIDM Museum & Galleries and the campus boutique selling student designs. The entrance to the LA campus, at 919 South Grand Avenue, is marked by a mosaic clock tower. 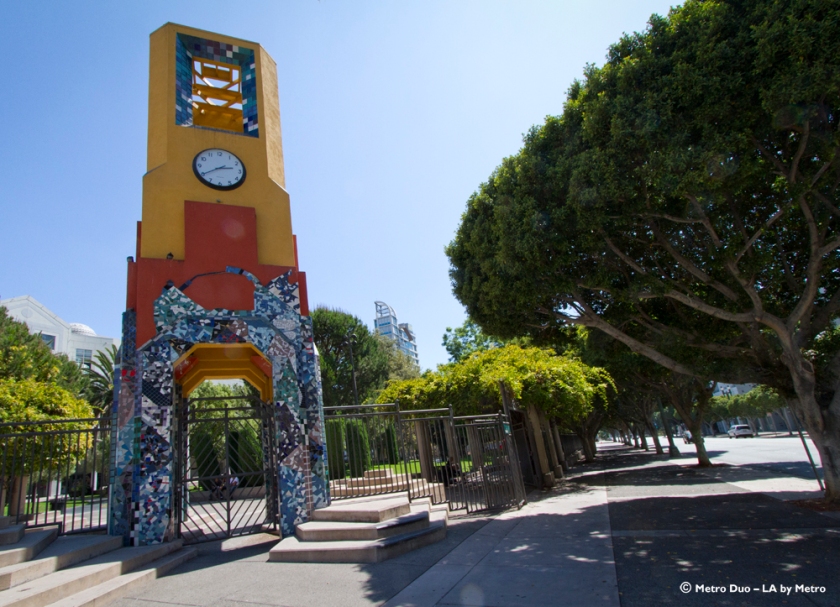 Adjoining the FIDM campus is Grand Hope Park, open to the public from 7 am to 8 pm during Daylight Savings Time, and 7 am – 6 pm during Standard Time. The 2.5-acre Grand Hope Park features numerous sculptures, benches and shade pergolas, rolling lawns, a mosaic fountain, and a playground.

Click on + below in footer for more menu options

This website was developed by Liane Enkelis and Garry Margolis, also known as the Metro Duo. Our website LA by Metro and our Facebook page have additional information on the Los Angeles Metro Rail system.

All photography, graphic images, and text copyright © and may not be downloaded or used without written permission. Please contact us to license usage of images or text.

How to get to…