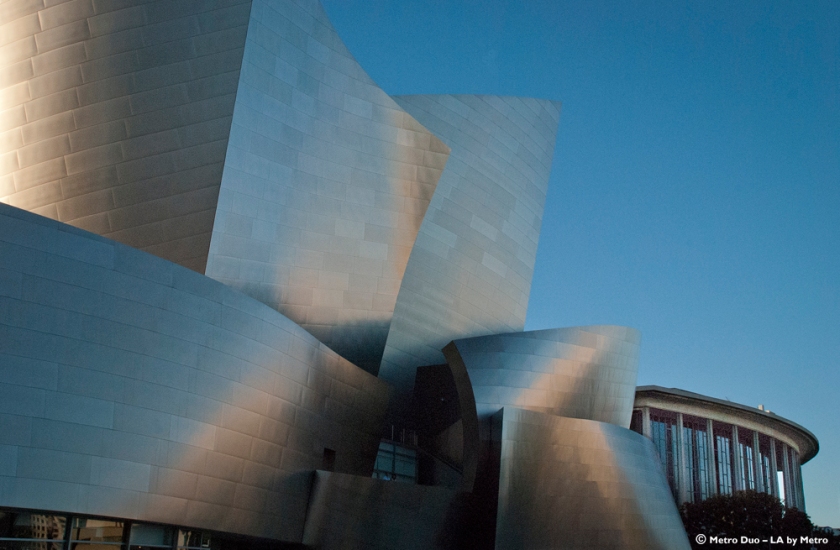 A Short Metro Ride from

This is a two-part walking tour of the area and its attractions. Either part can be done separately, or the two can be combined if you have enough time. Use our map to shortcut the tour and go directly to specific locations.

There are many interesting places to eat in Downtown Los Angeles, with many cuisines and price ranges. Instead of our giving restaurant reviews, we suggest using Yelp and Zagat — their mobile apps use GPS to help you locate the eateries close to where you are. 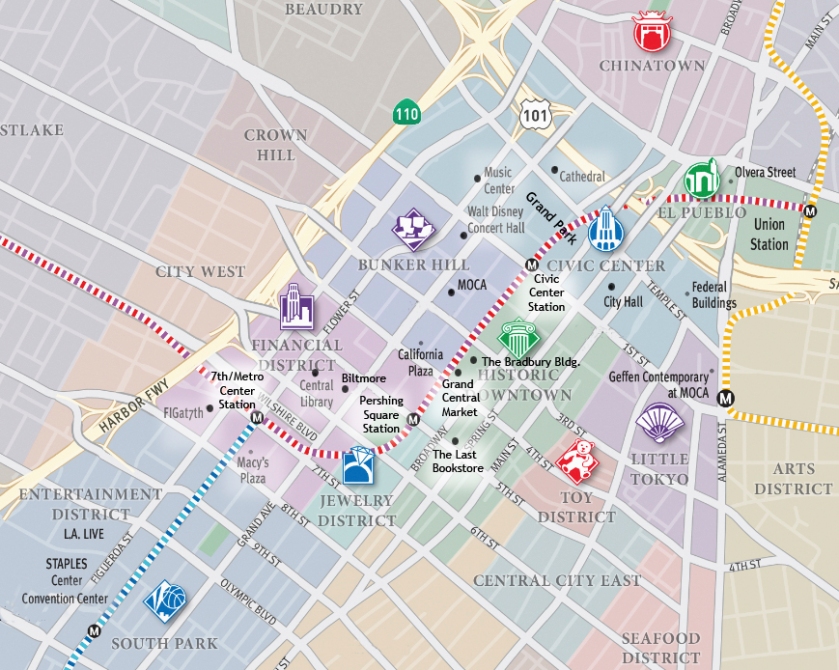 If you haven’t been to Los Angeles since the AES 113th Convention in 2002, you’re in for a visual treat.

This section of the tour starts at the Metro Red/Purple Lines Civic Center Station and takes in Grand Park, the Music Center complex, Walt Disney Concert Hall, the Cathedral, the Central Library, and much more. The tour continues to the Metro Red/Purple Lines Pershing Square Station, where you can continue on or return to your hotel or the Convention Center. You can walk through these sights in 2 – 4 hours, depending on how long you choose to stay at each. 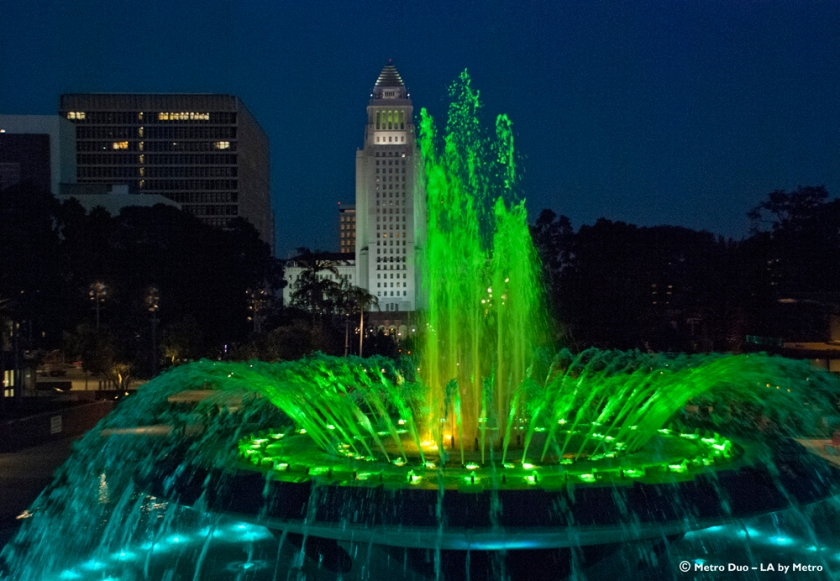 Grand Park is the newest addition to Los Angeles’ open public space, opened in 2013. It is anchored by the Music Center Plaza at its northwestern border and the iconic Los Angeles City Hall down the hill at its southeast end. Activities on its rolling lawns range from huge rock concerts to tranquil Tai Chi classes. Much of the landscaping is California native plants. 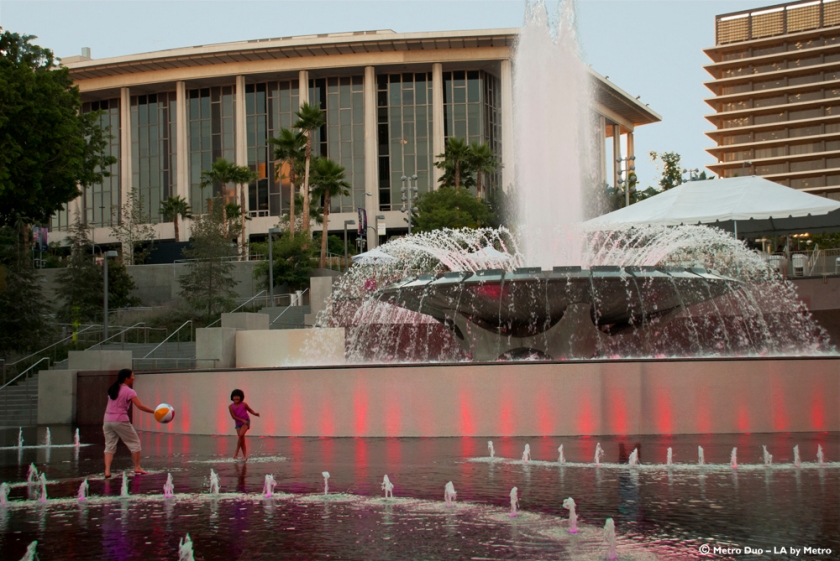 Take the Metro Red/Purple Lines to Civic Center/Grand Park Station (one stop before Union Station). Exit the station on the Temple Street side. The Los Angeles City Hall is the tall white building down the hill. Walk up the hill through Grand Park, past the fountain, to Grand Avenue. During the day, children gleefully splash in the area below the main fountain, and during evening hours, dramatic lighting enhances the view.

The Music Center Plaza is across Grand Avenue and up the stairs. The Plaza, between the Dorothy Chandler Pavilion and the Mark Taper Forum, features Peace on Earth, a Jacques Lipschitz sculpture in the middle of a very active fountain, and Dance Door, a Robert Graham free-standing sculpture that frames Grand Park and City Hall.

The Cathedral of Our Lady of the Angels, the seat of the Los Angeles Diocese, is on Temple Street between Grand Avenue and Hill Street, northeast of the Ahmanson Theater. Designed by Spanish architect José Rafael Moneo, its 11-story structure has virtually no right angles. Robert Graham designed the huge bronze doors at the entrance. Mass is scheduled at 7:00 am and 12:10 pm Monday through Friday, and 8:00 and 10:00 am on Sunday; a Spanish-language mass is held at 12:10 pm on Sunday.

The Walt Disney Concert Hall, Frank Gehry’s spectacular design, with acoustics by Yasuhisa Toyota, is the home of the Los Angeles Philharmonic, located across 1st Street from the Dorothy Chandler Pavilion. A self-guided audio tour can be obtained in the lobby, but, regrettably, the auditorium interior is not part of this tour — it’s publicly accessible only during concerts.

One less-known feature of Disney Hall is the Blue Ribbon Garden on its roof, accessible by elevator or stairs at the corner of 1st and Hope Streets or by stairs on Grand Avenue near 2nd Street. This oasis features A Rose for Lilly, a Gehry fountain sculpture in tribute to Lillian Disney and her love for Delft porcelain and roses. Adventurous visitors can climb onto the building using the stairs near the 1st and Hope entrance for unencumbered views of Downtown and the Civic Center. 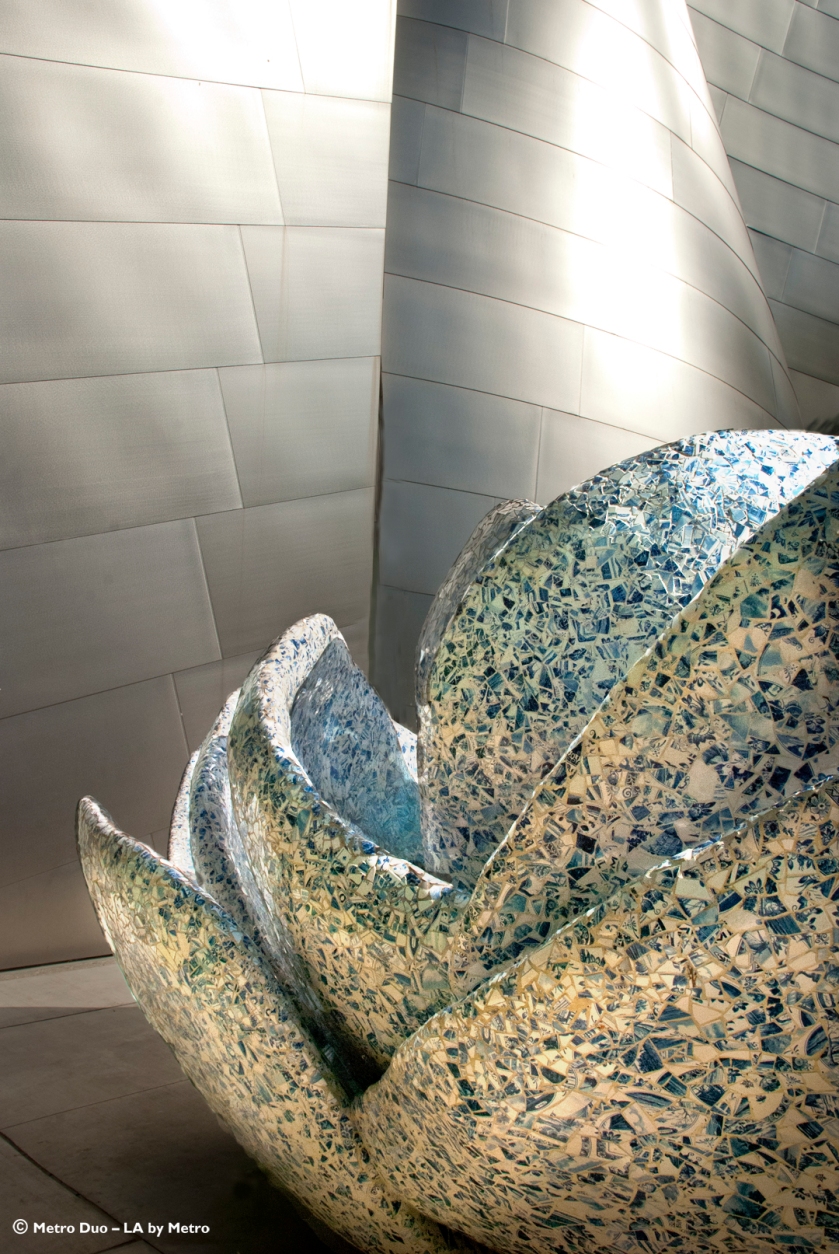 If you continue to walk southeast along Grand Ave., you’ll pass the Broad Museum, built by philanthropist and art collector Eli Broad to showcase parts of his collection, the Colburn School, an outstanding conservatory for music and dance, the Museum of Contemporary Art, California Plaza, home of free summer concerts, and, when you reach 5th Street, the Los Angeles Central Library. If this stretch of Grand Avenue looks familiar, you’ve probably seen it in many auto commercials.

The Central Library (pictured below) has art galleries with rotating exhibits and murals painted on the walls in the various reading rooms. The murals in the children’s room are very sweet. The tranquil Maguire Gardens is adjacent to the Central Library on 5th and Flower Streets. This pleasant park features two fountains. 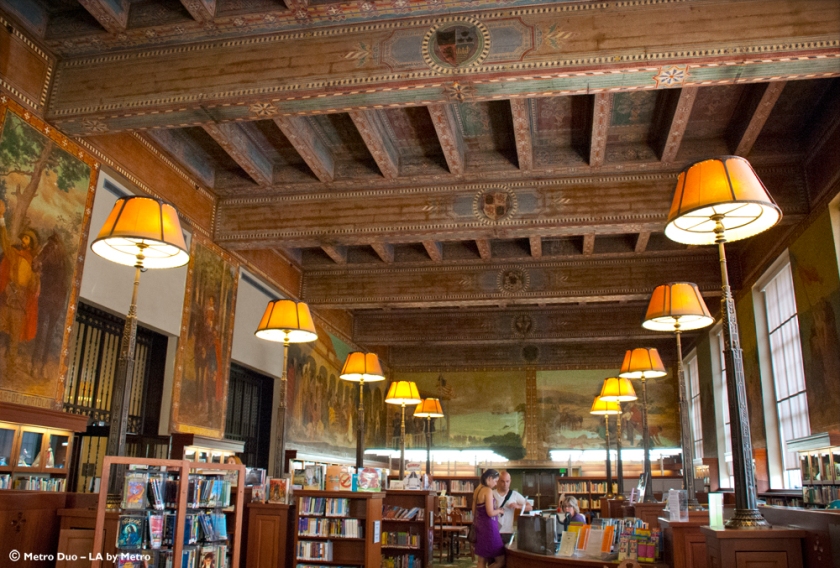 Walking southeast on 5th Street, you’ll pass the Millennium Biltmore Hotel, which was the headquarters hotel for the AES 113th Convention in 2002 and is one of the convention hotels for the 141st. It is well worth walking through both the Biltmore’s upper and lower lobbies. This is a good stopping off place for coffee in the lower lobby (pictured below) or an alcoholic libation in the upper lobby bar. 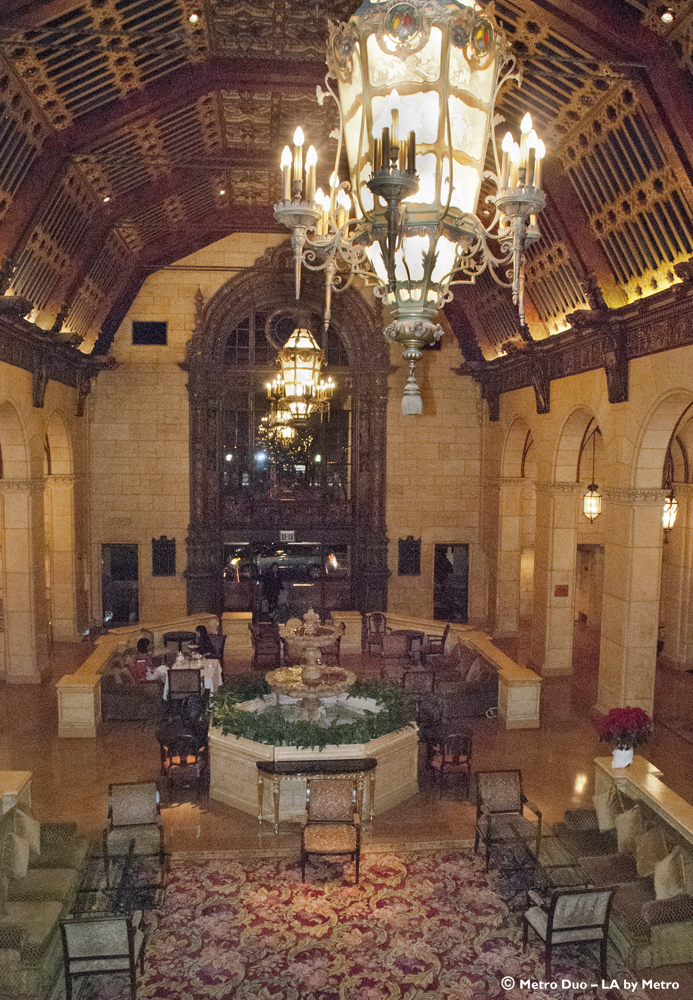 [If you are staying at the Los Angeles Athletic Club and wish to go directly there, turn right on Olive Street to 7th Street, then turn left to the entrance.]

Continue walking southeast on 5th Street, cross Olive Street and walk past Pershing Square, a relic of 1990s urban design. After you cross Hill Street, you’ll arrive at the south entrance of the Metro Pershing Square Station for the Red/Purple Lines, where you can end this walk. From here, take any train away from Union Station one stop to the 7th/Metro Center Station, the location of the Sheraton Grand and O Hotels, a short walk to the Westin Bonaventure Hotel, and the transfer point for the Blue/Expo Lines back to the Convention Center and the other convention hotels.

If you’re game for more, you can continue this walk by turning left (northwest) on Hill Street. If you are starting a new tour here at the Pershing Square Station, leave the station via the 4th Street exit, not the Pershing Square exit. Note the neon station art — until recently, it was thought that the first neon sign in the Western USA was located nearby, but it’s now known that San Francisco holds that honor. This section of the tour takes 1 – 3 hours, depending on how long you choose to stay at each location.

Walk northwest on Hill Street to Grand Central Market. It’s across the street from the historic Angels Flight funicular rail, which goes up to California Plaza. Unfortunately, Angels Flight is closed as of this writing because of mechanical problems.

Established in 1917, Grand Central Market offers a variety of prepared foods in addition to fresh fruits, vegetables, meats, etc. There are many new, trendy food stalls — the market is undergoing a redo. Restrooms are on the basement level. 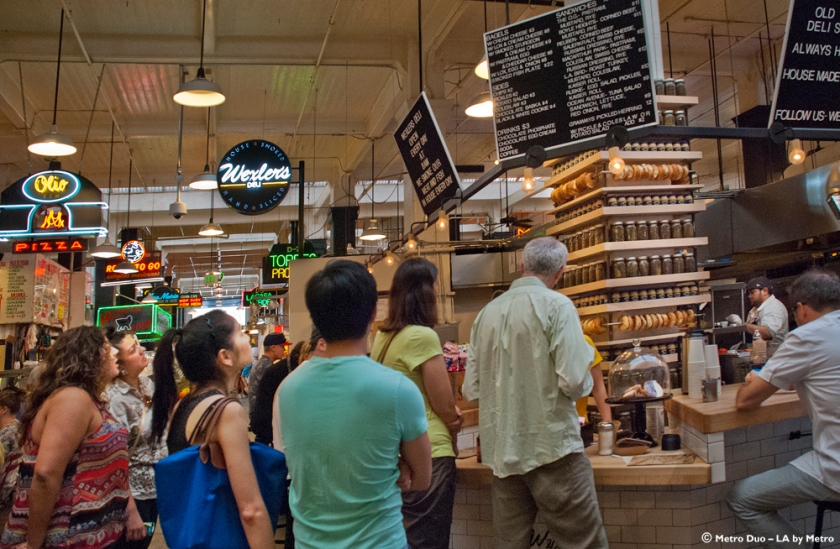 After getting your fill of sights, smells, food, and drink, walk through the market to the Broadway exit. Turn left and note the adjacent ornate building. Sid Grauman’s Million Dollar Theater was Los Angeles’ first movie palace, opened in 1918. You’ll get a better view of it when you cross Broadway to the Bradbury Building, which opened in 1893. The Bradbury’s ordinary exterior conceals a remarkable atrium (open daily until 5 pm except when filming or events are going on). It has been featured in numerous films, the best-known of which is probably Blade Runner. 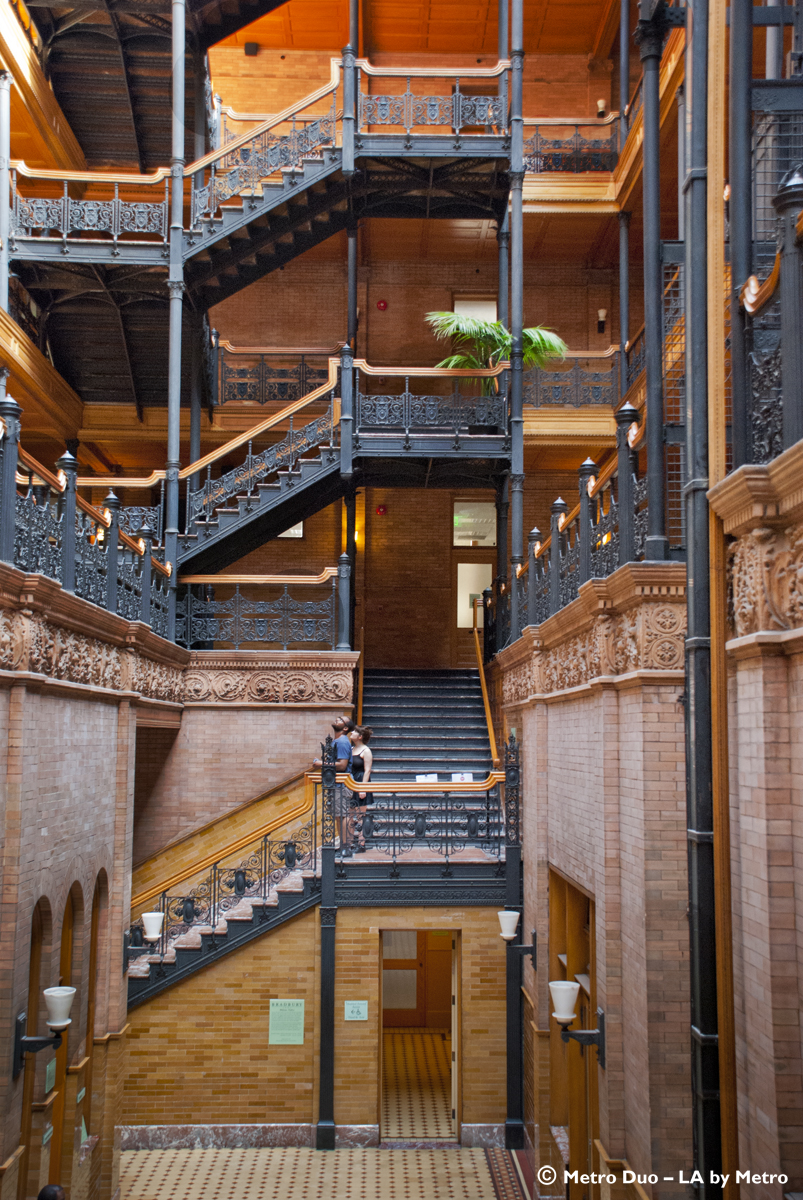 When you leave the Bradbury Building, turn left and walk southwest on Broadway. Note the recently installed pedestrian-friendly area across the street. Turn left (southeast) at 5th Street to The Last Bookstore, an architectural treat of a different type — the entrance is on 5th just before Spring Street. 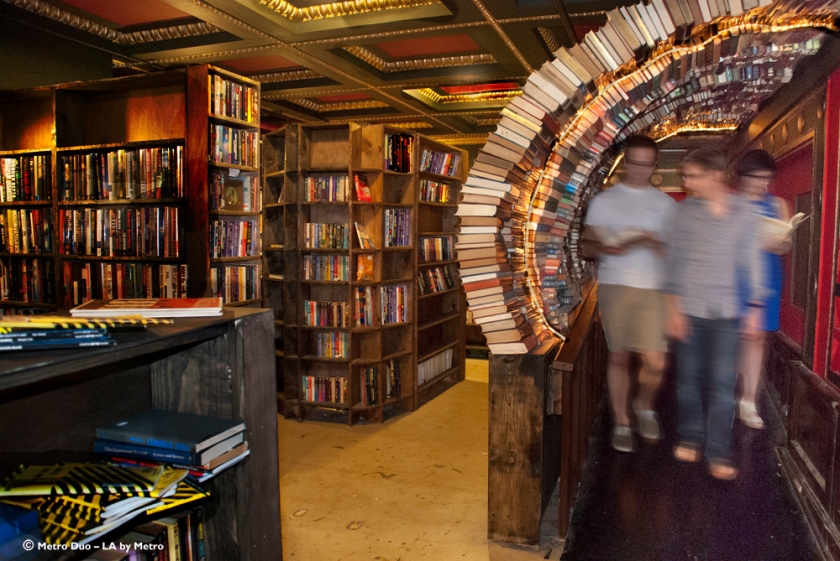 The Last Bookstore sells both new and used books. The used books that aren’t suitable for sale are turned into sculptures and store fixtures — even the checkout counter. Be sure to visit the mezzanine of this former bank to see the Tunnel of Books pictured here.

To end your tour, turn right on 5th Street and walk two blocks to return to the Metro Pershing Square Red/Purple Line Station. From here, the Millennium Biltmore is one block further; to get to the Los Angeles Athletic Club, turn left on Hill Street two blocks to 7th Street, then turn right one block.

If you wish, ride in the other direction to the end of the Red/Purple Lines at Union Station (pictured below), a 1939 gem that was the last of the major transcontinental railway stations. Exit the subway toward Alameda Street. Traxx Restaurant and Bar is near the main entrance. Be sure, however, to walk to the East Portal (follow the signs to the Bus Plaza) to see Richard Wyatt’s welcome mural (pictured on the AES 141 LA Welcome Page). You can return to the subway from this side of the station.

Click on + below in footer for more menu options

This website was developed by Liane Enkelis and Garry Margolis, also known as the Metro Duo. Our website LA by Metro and our Facebook page have additional information on the Los Angeles Metro Rail system.

All photography, graphic images, and text copyright © and may not be downloaded or used without written permission. Please contact us to license usage of images or text.

How to get to…